After the long development of Village Valley, the game is finally out! I thought it would be a cool idea to post a little behind-the-scenes devlog to tell the story behind the development of the game.

It all started in summer 2017. I was using Construct 2 at the time. I was starting game development with a small project that I called "Astro Adventure". It basically was a Metroid rip-off (shoutout to my Metroidvania Month Jam, you know how much I like metroidvanias, it was my first game genre). Then I made some other small games on Scirra Arcade. The last one I made and that could have some potential was Shooter Interstellar, that I don't know if I'm gonna remake it one day. 2017 ends, and I start 2018 with a couple of small arcade games. 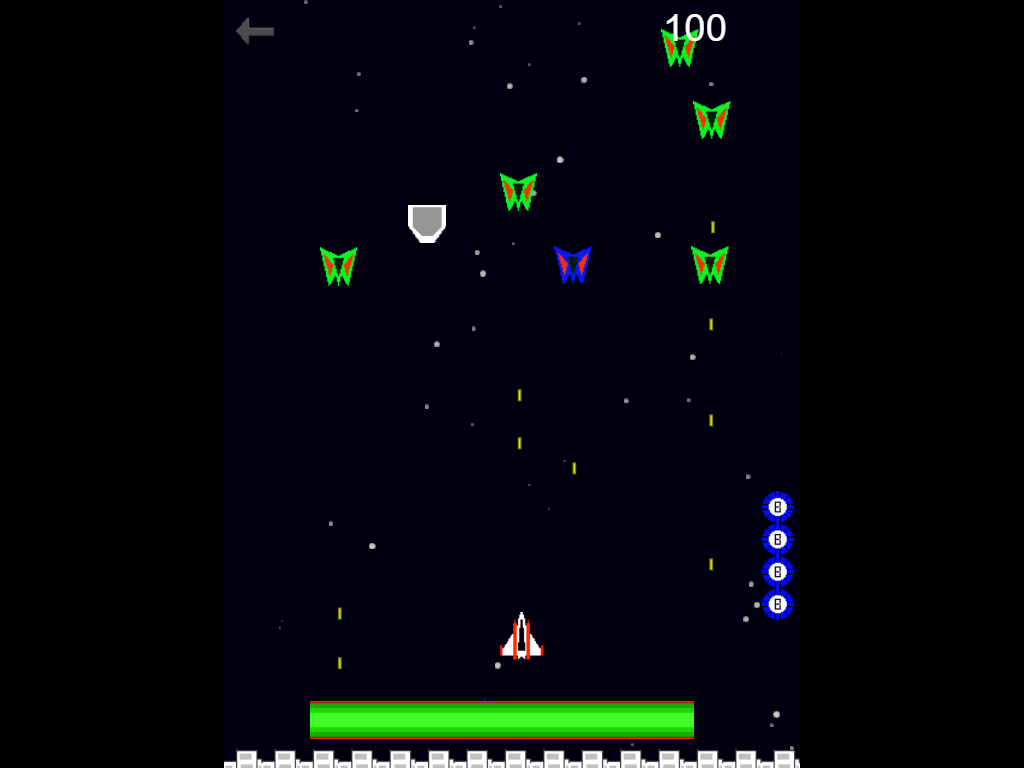 One of my arcade games, Shooter Interstellar

Then I found FisherG's pixel assets pack. I found it pretty cool and wanted to make something out of it. On March 30th 2018, I started Village Valley's development. The village came first: 4 houses, each one with a different size. Two of them were modified and are today the school and the hospital. I made the player and the map. I made it pretty big even at the beginning. The caves were made kind of randomly, and I had already added the gems and some secrets. My family said that it looked good, especially compared to my previous games. That motivated me, and I worked hard on the game. As you can see, I never used a plan to organize my ideas, never sketched a map or anything. 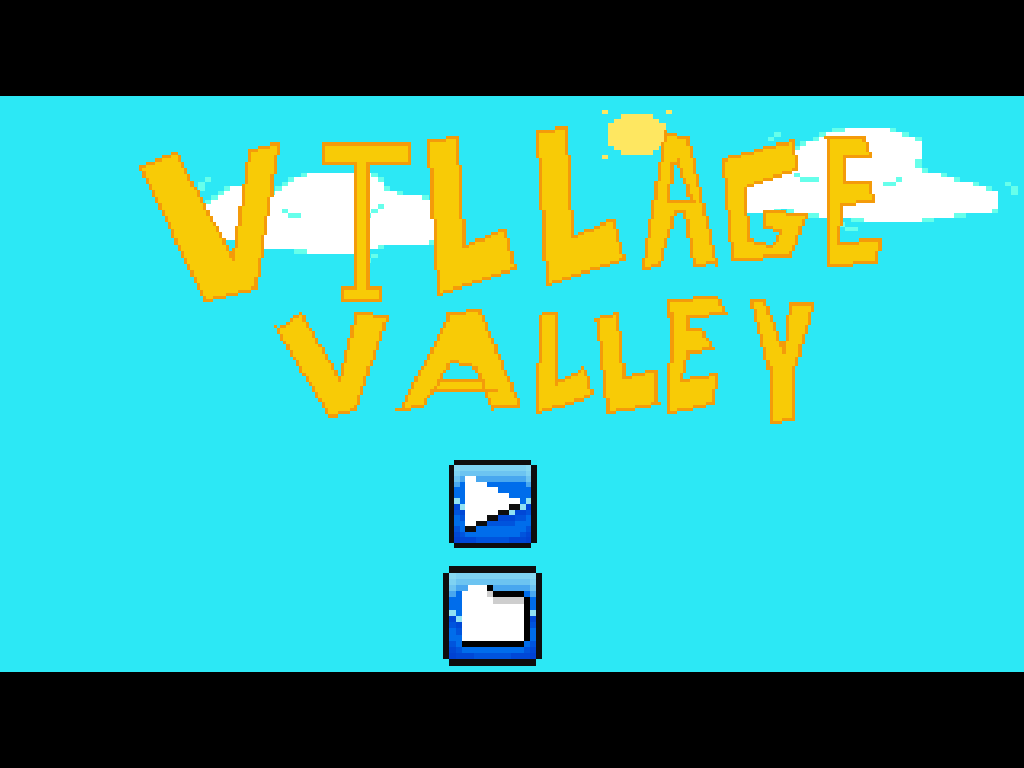 On April 24th 2018, my starter developer me was ready for release. The title screen looked awfully bad. There wasn't even a background in the game, only the flashy blue sky. A poorly drawn map. No health bar: only an "agony" timer, which slowed you down but gave you a chance to get to the hospital and cancel your death. The achievements were already all there though. No beach, low fps, poorly made hud... There still was a lot of work to do and there were many ways to make the game better. On June 9th, I asked for someone to make a trailer for the game since I didn't know about recording and editing software. And I found my first tester, TheOslaf. He played the game and helped with getting feedback and making it better. He made the first trailer for the game. Six days after I asked for someone to make a trailer, I found my second tester, LonelyWulfTreat, and she stayed until the end (shoutout to you and big thanks for testing until the end). In my first mail to her, I said that I was releasing the game the day after, June 16th 2018. But it got reported, reported, and on June 30th, it still wasn't out. Thanks to her opinion on the game's state, I decided to focus on making the game better and to report the release. A lot of improvements and polishing came from her. 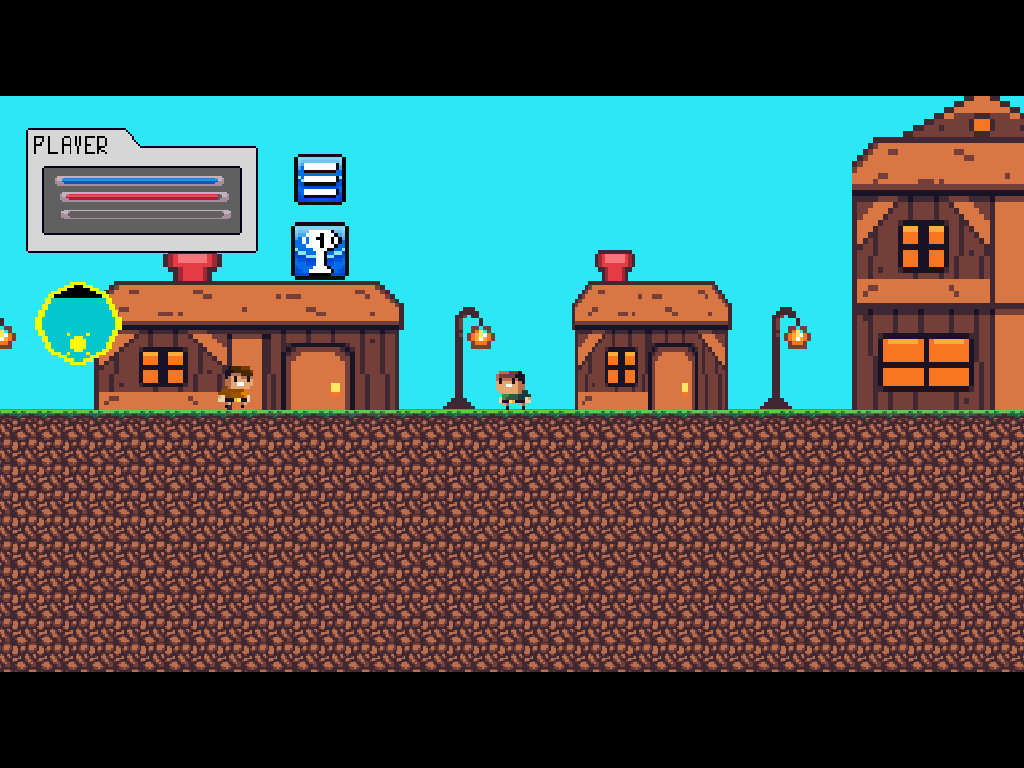 After that, I decided to change editor. In September 2018, I started making the game in Godot instead of Construct. I had 2 crashes and corrupted files, and I was limited by the free version, so I wanted a new editor. I started to learn Godot, and I liked it a lot, since it was unlimited and I could finally learn a "proper" coding language. So everything went back to zero, I had to restart the project. But I now knew where I was going and wasn't missing content. However, I had started to use Godot just a week ago, so it came with its pack of difficulties. Using physics, different nodes... I knew a good part of the concepts since I knew what game dev was like, but it was a complete change of environment. I also finally made a plan, so organizing and reproducing stuff became easier. Little note to developers out there: make a plan before creating a game. It will make it infinitely easier.

From exterior eyes, it looked like the development was inactive. Last time I talked about an update was in December 2018. After that, I was making Village Valley in Godot and not posting anything since there was basically nothing new, it was almost copy-pasting a project in another editor. Meanwhile, I wasn't getting new members on my Discord server, and I slowly stopped talking with my first tester, same for LonelyWulfTreat. I was getting discouraged, and I slowed down the development. 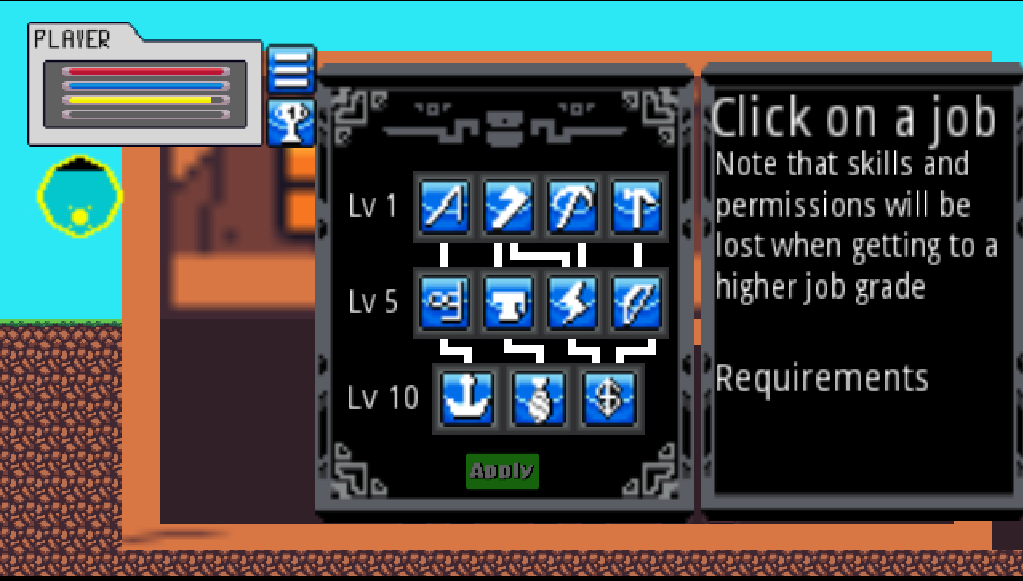 The last update I talked about before the stasis: a redesign of the menus

But I was missing game dev. In June 2019, I found the FEFFS. I wanted to submit the game to the video game festival, but I hadn't catched up with my Construct 2 version yet. So I sped it up, and even though savegames have been a pretty hard thing to make, the game was ready on time and I submitted it to the festival. Even though I wasn't chosen, it motivated me, and on June 12th, I released the Godot version, which had some changes in graphics and bug fixes. I started talking to Lonely again, and I decided to get more testers to play the game (shoutouts to Some Pixel Guy, PsySpy, Bifflestein, and others that helped). 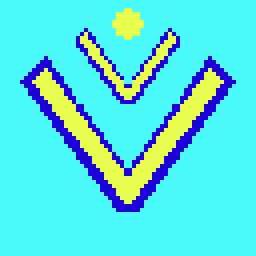 Village Valley's .exe icon, since I needed to make an .exe file for the FEFFS.

It's done! I can release it! At least that's what I thought. I had a lot of feedback, and I felt like I couldn't polish the game more than it already was. I planned on releasing it in August. But then again, Lonely talked with me, on July 31st, and I decided to put the game in "early access". I wanted to sell the game for 5$, but I looked at some other games, and I finally decided, under doubt, to not release it. 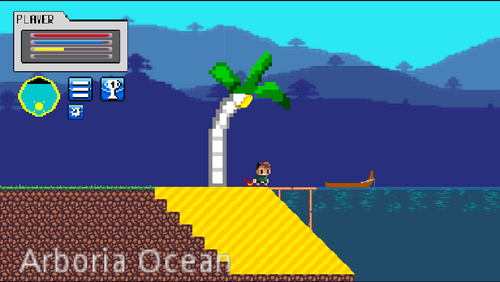 A picture from the quality of life update, that I published on July 18th

Comparing with other games, even though it was a good way to find out what could be better, was pretty discouraging. We were in September, and the game still wasn't released. I released a beta update, but the only things that had changed in 2 months were polishing and bug fixes, and I implemented a tutorial. Even though I had 6 testers, I had a hard time getting good feedback, feedback that points what is wrong and tell me precisely what should be changed.

On November 16th, I published a devlog on the beta's page saying that I would be releasing the game on December 6th and that I was calling on all testers to give me last minute feedback. I was discouraged and I just wanted to get done with the game, since I knew it has been in development for almost two years, and it wasn't progressing anymore. I didn't want another stasis. The three weeks passed, and the release day arrived. I wanted to release the game at 10 AM (UTC-5). Before publishing the page, that was ready since two days, I realised I didn't have a proper trailer for the 1.0.0 version, so I decided to make one. And in the 6 clips of gameplay I recorded, I corrected about 10 things. I knew that I was releasing the game to get done with it, and I remembered about Lonely's advice, so I decided to put the state of the game in "early access" (and it is kind of true, because I'm sure there is still a lot to be corrected) and to sell the game 3$. It was 12 AM and the game still wasn't released, between me correcting bugs and editing the trailer. I finally got to upload the trailer on Youtube, paste the link into the itch.io page, scroll down and checked the "Published" box. Then I moved down the mouse over the save button. It's that button. That moment. Almost 2 years of work, difficulties but also good times, getting to know new people, good and bad feedback, everything would be done on the moment I clicked on it. My hands were so cold when I did and published the game. I don't even know why I was stressed but I was. Finally, it was released! 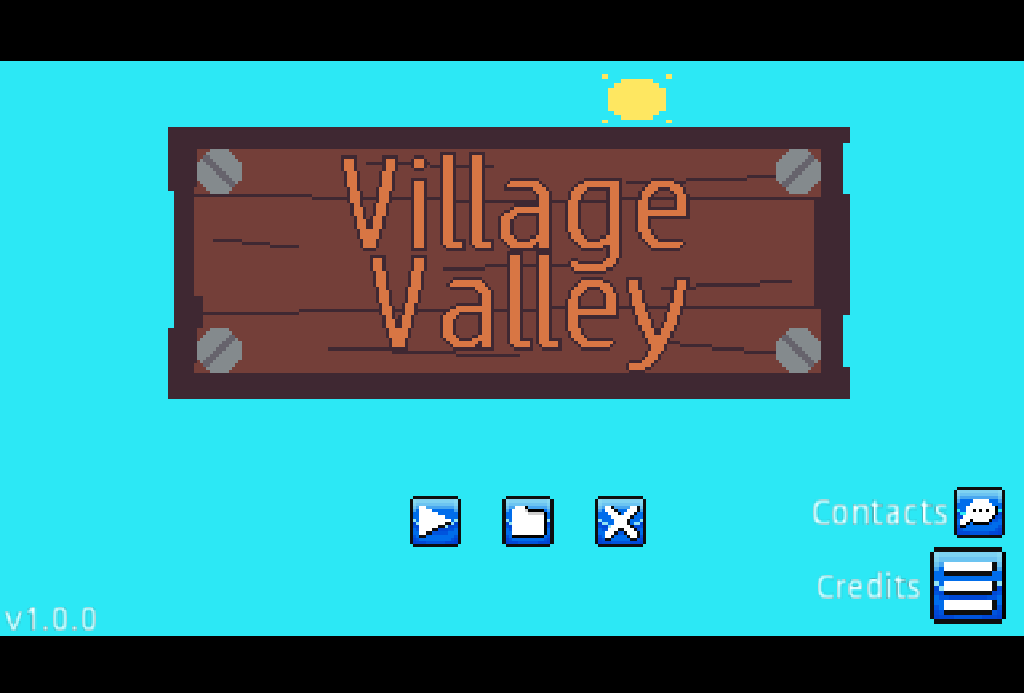 Village Valley's title screen today. You can see the improvement when you compare it with the first version.

I sent a message to Lonely to thank her for all her help with Village Valley's development, and then I felt kind of sad. All the afternoon, my mood was kind of down. Looking back on its development, and writing this devlog helped me realise it, making this game has been so much fun! Finding solutions to frustrating bugs, adding the most stuff I could, taking good feedback and inspiring ideas from others, all of this is what make game development fun, in my opinion. And it felt like I put an end to an amazing adventure, even though I can still publish updates. Is it really the end? Would I move on to another game idea, or just take a game development break? These thoughts made me sad, but it certainly isn't the end. I hope people, and particularly you, will enjoy playing the game that took so long to make. And I hope that this devlog can help new developers learn that making a game, especially if you're alone, won't be a piece of cake, but that it isn't impossible and brings a lot of satisfaction in the end. 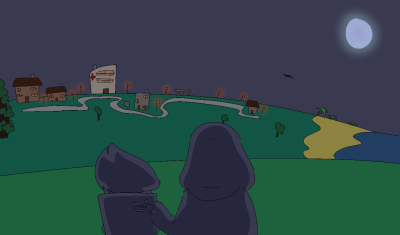 I maybe was the only one developing Village Valley, but I would've never published the game without the help of all these people. A big thanks to:

TheOslaf, the first tester of the game, even though I haven't talked to you in almost a year.
LonelyWulfTreat, the second tester, that stayed until the end and greatly helped me with the development.
NickyKitty007, who is the (procrastinating) artist behind the 4 endings, and that gave me feedback since the start.

Also to my testers that, even if they joined later, helped with the development:

To everyone that I borrowed some assets from:

FisherG, for most of the world assets.
Eric Matyas, from who the soundtrack of the game comes from.
Kicked-in-Teeth, for many UI buttons (precisely this pack).

And to everyone who know me personally, played the game, listened to me presenting it, gave feedback, and supported me through those 2 years.

An exploration/life-simulation 2D game! Discover secrets, get a job, find your own path!